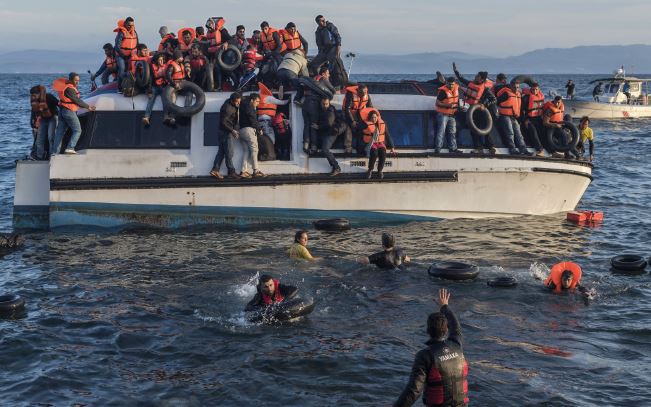 IRAN is a country with a long history and a rich heritage. Two and a half thousand years ago under its former name Persia, its most illustrious king Cyrus the Great built a world empire which lasted for two centuries. It has been at the heart of the life and culture of the Middle East since.

But in recent years Iranians have been fleeing their country in increasing numbers. These people—men, women and children, mostly from educated and comfortable backgrounds—leave everything they have and everyone they know behind, put their lives in the hands of ruthless people-smugglers, and set off into the unknown. Why do they do it?

We follow the real-life experiences of Meysam, a young Iranian who fled to England.

A Muslim in Iran

Meysam grew up as a strict Muslim. He lived in a region where Islam was taken very seriously, and although his parents were not overly strict he was attracted to Islam and practised it faithfully. He attended all the ceremonies at his mosque, and all the further religious observance of his community. He travelled to Iraq three times to visit one of the holiest shrines of the faith.

He prayed and worshipped, but as he grew older he was troubled by the feeling that his faith seemed to be just a series of rituals. He struggled with the way some people practised their faith, and in particular with the way many men treated their wives.

He fell in love with a girl. They were very happy together and wanted to marry. However, because they were from different sections of Islam (Sunni and Shia), their parents forbade the union. He was devastated.

A Christian in Iran

Meysam’s grief was clear, and his friends were worried about him. In an attempt to assuage his pain one friend introduced him to an ‘underground’ Christian church. Christianity is banned in Iran, so believers have to meet in secret.

He was quickly converted. He had only attended the church around half a dozen times, but he was enthused by his new faith and felt he had to spread the word to others. He preached to his former girlfriend and gave her some Christian literature—but the literature was discovered by the ‘moral police’ and suddenly his life was in danger.

It is a regular occurrence in Iran: people who convert to Christianity are arrested, and never seen again. Meysam knew that he had to flee.

Journey Into the Unknown

He found a people-smuggler who took him to Turkey, obtained a false passport and flew with him to London. They landed at Luton Airport. The smuggler disappeared, and Meysam was on his own, in the middle of a busy airport in a foreign country with no documents. He summoned the courage, and spoke to the Border Force. They gave him a form, and so started the process of claiming asylum. It was stressful and frightening, even for a young and well educated man.

He spent a week in a hostel in London, then he was moved to a hostel in Liverpool. This is where he first came into contact with Christadelphians.

Meysam arrived in the UK as a Christian, but he had little grounding in his faith. Because of the dangerous situation and the lack of access to Christian materials, there is not much Bible teaching in Iranian congregations—services consist mainly of praying, singing, and sharing life stories, which provide valuable moral and spiritual support but little substance. Meysam wanted to learn about the Bible.

From Liverpool he was moved to Manchester, where he continued his Bible studies and his faith deepened and widened. In time he was baptised, and he began to help his fellow Iranians in the hostel get to know the Bible and build faith for themselves.

Meysam left Iran because of his Christian faith. We asked him about how he came to that faith, and his experiences since.

What is the religious situation in Iran?

“Many Iranians no longer believe in Islam, in fact many just pretend to be Muslims. In Iran today there is no justice, no economy, and a weak education system. People are terrified by the government and their secret police but are financially weak and have no one to lead them. Religious observance is the top priority for Iran’s government. This is probably because of all the many problems in their society, this is one they can control.

“The younger generation are often well educated and prepared to question the religious authority. More and more reject religion altogether, others join secret Christian groups. It used to be very rare that you met a Christian; now most people have a friend or know someone who is Christian.”

How do you view the Koran?

“I believe that the Koran is an Arabic history book, which is in some respects copied from the Bible. It is not the word of God and doesn’t hold the truth. If you read it, you will be confused. The Koran doesn’t teach about salvation or the love of God—just sin and the punishments you get unless you do everything right all your life.

“It’s a real problem that people are too scared to research it for themselves, they have to rely on Imams. If the government believe Islam is true, why do they stop people researching it?”

What is your view of the Bible?

“The Bible is the word of God, and by reading it and asking questions we can see the whole picture of the Bible and it all connects together. This is how we can develop our faith and understanding of God’s plan. It is also vital to put Bible teaching into practice every day, for example, love your neighbour, don’t lie.”

You left everything behind—a career, possessions, qualifications, family. What is it like having come here with nothing?

“It really is hard! At 34 years old, to have no ID card or passport, no accommodation, no car or driving licence, no money and no friends. Many have left families, wives, husbands, or children. But we can find comfort and peace in the Bible.

“If we accept that God has a plan for each of us, then we can deal with the situation. We must leave everything in God’s hands. “To everything there is a season, a time for every purpose under heaven” (Ecclesiastes 3:1).

“God made my life hard to introduce His truth to me—even that situation with my girlfriend. Now I’m happy and confident, even though I have no visa or material things. I am finally truly happy, which I never was back in Iran. I had everything but didn’t have God and Jesus in my life, and now I do. Being happy is not about material things, it’s about your attitude and state of mind; for me that is belief in God and His care and His plan. There is no room for doubt.”

Some may ask, ‘Do Iranians convert to Christianity just to get help with their visa applications?’

“Some Iranians may have tried to use Christianity to help get their visa, but it doesn’t fulfil them. They can go to a church a few times and get a document, but they soon stop going.

“By contrast, I have seen many people who already have their visa wanting to be baptised and bringing their friends and family. It’s really important to have the true Gospel. They get this through reading the Bible themselves and asking questions. Then they can build a real, lasting faith.”

Why does the Bible-based Gospel have impact with Iranians?

“Most churches teach that God is three persons in a trinity. People who come from a Muslim background find this idea incomprehensible. The Bible’s simple teaching that God is the Creator and Jesus Christ is His Son makes perfect sense.

“Having grown up indoctrinated by Iran’s hatred for Israel, many Iranians are fascinated to see the central place of Israel in God’s purpose. Christianity is not about political support for the nation of Israel, but we do recognise that the Jews are God’s people. It’s exciting to see the connection between prophecy, history and the future.

“Most powerful is Jesus’ preaching about the Kingdom of God: ‘The time is fulfilled, and the kingdom of God is at hand. Repent, and believe in the gospel’ (Mark 1:15). He died for our sins and rose from the dead—that teaches about salvation and demands our attention! He taught us about love, repentance and faith. We can see that this is the Truth.”