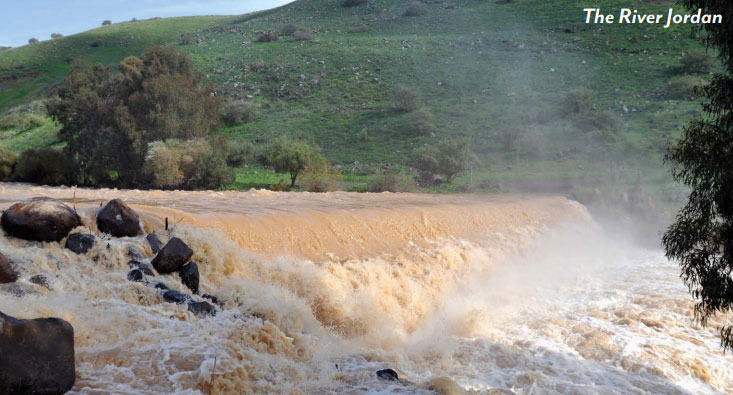 WHEN Elijah fled to Sinai from Jezebel’s anger, he heard the Lord speak to him in a voice of gentle stillness. Then he was sent back with work to do. One of the tasks was to anoint his successor: Elisha the son of Shaphat of Abel Meholah you shall anoint as prophet in your place (1 Kings 19:16).
Of the three tasks given him, this was the only one Elijah actually carried out. Although we are told that Elisha went after Elijah to assist him, we do not hear of Elisha again until the time came for Elijah to finish his work.
And it came to pass, when the Lord was about to take up Elijah into heaven by a whirlwind, that Elijah went with Elisha from Gilgal (2 Kings 2:1). Presumably Elijah had set off with Elisha, but nothing seems to have been said to Elisha about what was to happen. Elijah then asked his assistant to remain at Gilgal, for God had sent him on to Bethel. Elisha seems to have sensed that there was to be an imminent parting, and so would not leave Elijah to be on his own for what would possibly be his last journey. When they arrived at Bethel, about 18 miles from Gilgal, they were greeted by the ‘sons of the prophets’.
Elijah and Elisha had organised the true followers of God into groups that would pass on God’s message to the people of Israel. These young men had a message for Elisha: “Do you know that the Lord will take away your master from over you today?” And he said, “Yes, I know; keep silent!” (v3). Elisha told the young prophets to keep quiet about it, perhaps because he wanted to spend his remaining time with the older prophet, quietly listening to him.

To Jericho
Elijah had another message for his young aide. He was now to stay at Bethel, but God had sent Elijah on to Jericho. This would be almost back in the direction they had come, another fifteen miles or
so. Again, Elisha insisted that he would go with Elijah. Presumably this whole trip would take more than a day, perhaps two or even three. 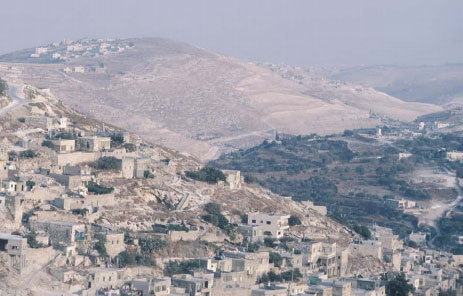 At Jericho they were met by another group of these sons of the prophets, who had the same message. Elisha responded just as tersely as before. He was becoming aware of the burden which was to be placed on his shoulders, when Elijah was no longer there to deliver the uncompromising messages from the Lord God. Yet again Elijah asked Elisha to remain at Jericho, for God had sent him on to Jordan. This would only be a further six or seven miles. Again, Elisha was adamant that he would not leave his mentor: As the Lord lives, and as your soul lives, I will not leave you! (v6). So the two continued, completing their journey of some forty miles together, and coming at last to Jordan. Fifty of the sons of the prophets followed them from Jericho, keeping a respectful distance from these two men, deep in conversation. At certain times of the year Jordan would have been easy to cross, but when in flood
it would have been very difficult. The problem of crossing the river was solved. Elijah took off his cloak, rolled it up and struck the water with it. Miraculously the waters parted to allow the two to cross on dry ground.

A Double Portion
It was then that Elijah asked Elisha what he should do for him, before he was taken from him. There was now no hiding that this was to be the time of parting. Elisha had no hesitation: Please let a double portion of your spirit be upon me (v9)

Elisha was not asking for twice as much as Elijah had, but rather the portion of the firstborn. The Law of Moses acknowledged that firstborn sons would receive a double portion of inheritance from their father, whatever the father thought of his sons: He shall acknowledge the son of the unloved wife as the firstborn by giving him a double portion of all that he has, for he is the beginning of his strength; the right of the firstborn is his
(Deuteronomy 21:17). Elijah’s response was conditional, he was leaving this in God’s hands: You have asked a hard thing. Nevertheless, if you see me when I am taken from you, it shall be so for you; but if not, it shall not be so
(2 Kings 2:10). 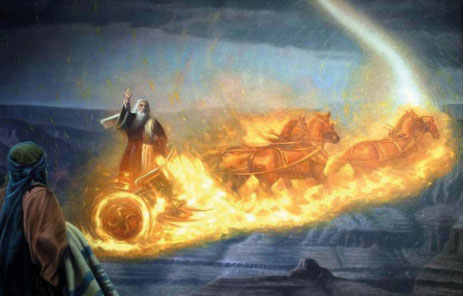 The Fiery Chariot
The two continued on their journey a little further when suddenly a chariot of fire and horses of fire separated them, and we are told that Elijah went up in a whirlwind into heaven. Elisha saw it all happen, and then just as suddenly Elijah was lost from sight. He could see him no longer. Elijah’s cloak had fallen to the ground, so Elisha picked it up. He tore his own coat into two pieces and set off back along the
way they had come. When he came back to the banks of Jordan, he struck the water with it as Elijah had done, calling out: Where is the Lord God of Elijah? (v14). The God of Elijah was clearly with Elisha too. The water parted again as it had not long before. This time on his own, but still on dry ground, Elisha crossed back to the western side of Jordan. He was met by a group of the sons of the prophets, who recognized that the mantle had passed from the old to the new. Elisha was now the prophet of God in place of Elijah. They wanted to go and look for Elijah, fearing that he had been dropped by the whirlwind onto a mountain or into a valley. Elisha initially refused, but was urged to let them go. Eventually, he reluctantly allowed them to search, but even after three days, they could not find Elijah. Elisha reminded them “Did I not say to you, ‘Do not go’?” (v18). For the moment, Elijah’s work was over.

A Letter from Elijah
There was a brief, unusual follow–up however. In the reign of Jehoram of Judah we are told of a letter coming from Elijah. This would appear to be about two years before the death of Jehoram, in around 843 BC. The rest of Elijah’s work came to an end just after the reign of Ahaziah, around 852 BC. Some nine years had passed since Elijah was taken away.
And a letter came to him from Elijah the prophet, saying, Thus says the Lord God of your father David: Because you have not walked in the ways of Jehoshaphat your father, or in the ways of Asa king of Judah, but have walked in the way of the kings of Israel, and have made Judah and the inhabitants of Jerusalem to play the harlot like the harlotry of the house of Ahab, and also have killed your brothers, those of your father’s household, who were better than yourself, behold, the Lord will strike your people with a serious affliction—your children, your wives, and all your possessions; and you will become very sick with a disease of your intestines, until your intestines come out by reason of the sickness, day by day (2 Chronicles 21:12–15). We are not told where the letter was written from, nor how it reached Jehoram. We must assume that the Lord God had removed to Elijah some place of safety, but because of the appalling behaviour of Jehoram, God allowed this letter as His warning. Now Elijah’s work really was complete.
Mark Sheppard

Back to March 2019 issue main index