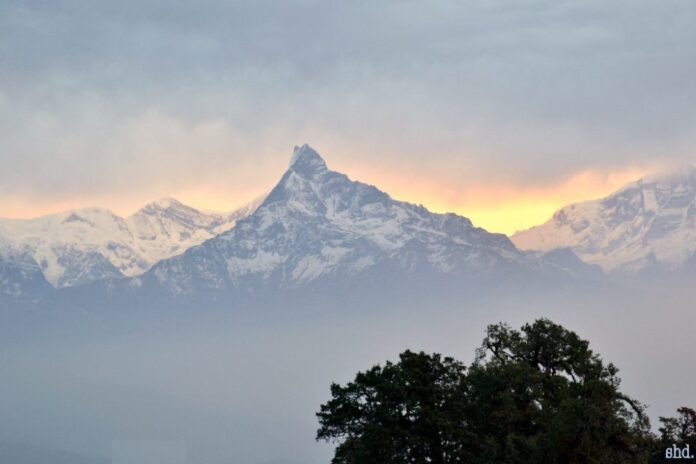 IT WAS AN EARLY morning in Nepal. Our bleary-eyed band of men, women and children climbed aboard the old bus. We shivered in the cold night air. Some were slightly fearful, others excited because this was their first ever trip on a bus, out of Kathmandu, a journey into the unknown.

The crate of fresh drinks and breakfast boxes were loaded aboard and we set off. The bus rattled and banged through the dark streets. The excited chatter of its passengers subsided, partly because it was difficult to hear each other, partly because of the slight uneasiness that accompanied the journey. Eventually the streets gave way to roads and the roads conducted us onward and upward towards the Annapurna mountains. The old bus began to protest as it climbed from the valley floor high into the foothills. It was a race against time to reach a spot from which we could watch the sunrise.

At last the bus screeched to a halt on the loose dust and grit. The driver killed the engine, and there was a moment or two of silence. Then the chattering began again as people stirred and scrambled off the bus.

We stood and shivered in the cold morning air. What now? We looked around to get our bearings. Out and ahead of us was a valley, a vast open space, and beyond that the hills rose again, rose again into great snow-topped peaks. In the darkness ahead appeared a glimmer of light silhouetting the mountains, and the glow of day began to steal across the mist that rested in the valley. Again the chattering stopped, and we stood still and gazed at the sunrise.

The Coming of Light

The glow of daylight increased behind the mountain tops. The first rays of the sun appeared over and around Mount Everest, then they spread out, in between the lower peaks and across the valleys below. Spontaneously the women in the party began to dance and sing. Light was coming into the world, lifting hearts and minds in exaltation. As the dance progressed, the sun rose in the sky dispelling the darkness. The music and dance subsided, but the sun rose higher and brought warmth to the world.

It was time for a prayer of thanksgiving to the Almighty Creator of heaven and earth.

The words of a Psalm came to my mind:

The heavens declare the glory of God, and the sky above proclaims his handiwork.

Day to day pours out speech, and night to night reveals knowledge.

There is no speech, nor are there words, whose voice is not heard.

Their voice goes out through all the earth, and their words to the end of the world.

In them he has set a tent for the sun, which comes out like a bridegroom leaving his chamber, and, like a strong man, runs its course with joy.

That experience of gathering warmth and light on the mountainside showed what a blessing it was for God to have created light first and then appointed the great lights of the sun and moon to regulate the days and nights, times and seasons on the earth (Genesis 1).

The Gift of Life

When God created the human race, starting with Adam, He did not create him in a vacuum. He gave him an idyllic place in which to live, the garden of Eden (Genesis 2). His task was to care for the garden, take responsibility for it. It was to be a joint project undertaken by man and woman in the closest of all human partnerships. Eve, having been created out of Adam’s side, was brought to him as a suitable helper in their life’s work. Just as every new day is a remembrance of that first day when light was brought to the earth, so each new live birth is a celebration of the human partnership God first made with Adam and Eve and is, indeed, just as much of a miracle.

What a terrible shame then—having been appointed   custodians   of   such a breathtakingly beautiful planet (Genesis 1:28),   we have reduced it to a world which is facing environmental disaster. Humankind has sought other gods—the gods of material progress and secularism.

Nothing New Under the Sun

Nearly 2000 years ago the Apostle Paul walked the streets of Athens and arrived in the marketplace, and began preaching. He was soon spotted. I imagine he was preaching with some venom as he had been aroused by the sight of one idol after another, one altar after another to this and that god. Finally he had noticed the altar to the Unknown God—which had been erected in case there was another god they had missed. (It was the same in Nepal: all manner of things were marked with a red- orange dye to indicate that they had been dedicated as gods, including me on one occasion!)

Paul was noticed as one who was speaking about ‘foreign divinities’ (Acts 17:18). They   called him a ‘babbler’—literally a ‘seed picker’, one who idled his time away and made a living picking up and recycling scraps of knowledge. But they were interested, and he was taken to the place where the best minds of Athens met to discuss new ideas – Mars Hill, the Areopagus (v. 19).

Incidentally you can visit the exact location where Paul stood to speak to them. The spot is marked by a plaque. This is what he said:

Men of Athens, I perceive that in every way you are very religious. For as I passed along and observed the objects of your worship, I found also an altar with this inscription, ‘To the unknown god.’ What therefore you worship as unknown, this I proclaim to you.

The God who made the world and everything in it, being Lord of heaven and earth, does not live in temples made by man, nor is he served by human hands, as though he needed anything, since he himself gives to all mankind life and breath and everything. And he made from one man every nation of mankind to live on all the face of the earth, having determined allotted periods and the boundaries of their dwelling place, that they should seek God, in the hope that they might feel their way towards him and find him.

Yet he is actually not far from each one of us, for ‘In him we live and move and have our being’; as even some of your own poets have said, ‘For we are indeed his offspring.’ Being then God’s offspring, we ought not to think that the divine being is like gold or silver or stone, an image formed by the art and imagination of man.

The times of ignorance God overlooked, but now he commands all people everywhere to repent, because he has fixed a day on which he will judge the world in righteousness by a man whom he has appointed; and of this he has given assurance to all by raising him from the dead.

You will perhaps have noticed that Paul did not mention Jesus Christ by name, but he is at the centre of Paul’s message.

On another occasion this is what the Apostle Peter said to his audience in Jerusalem:

Repent therefore, and turn again, that your sins may be blotted out, that times of refreshing may come from the presence of the Lord, and that he may send the Christ appointed for you, Jesus, whom heaven must receive until the time for restoring all the things about which God spoke by the mouth of his holy prophets long ago (Acts 3:19–21).

There is a challenge, of course: you have to repent, change your ways, leaving behind all worldly idols, believing in the wonderful person, the Lord Jesus Christ, as the only true representative of the Living God. The question is—as it was with the Greeks of Athens, can you really believe in the living and true God, the God who has a unique plan and purpose? Can you believe in the resurrection of the dead? Or is it just a bit of ‘babble’ to you? It is the only true hope for humankind. It is the ultimate miracle which makes life worth living, and brings light and warmth into this dark cold world.