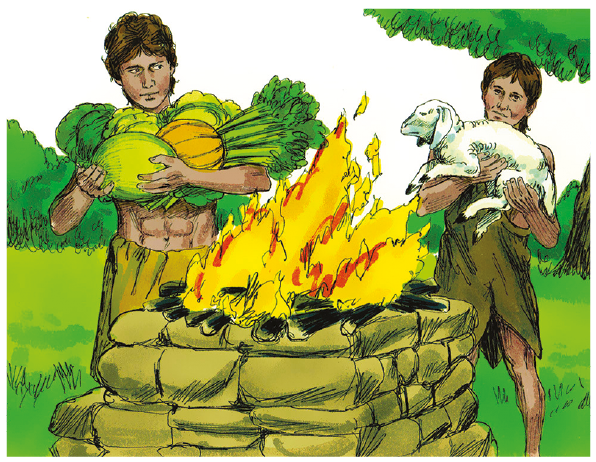 THE ACCOUNTS of the first act of worship in human history and the first murder are recorded in Genesis chapter 4. They follow the account in chapter 3 of Adam and Eve’s disobedience to God in the Garden of Eden and the entrance of sin into the world.

Cain and Abel were the sons of Adam and Eve. They each brought an offering to God (Genesis 4:3). Some wonder how Cain and Abel were to know what to sacrifice. The answer is that their parents must have instructed them concerning the details of acceptable worship. Adam and Eve had tried to hide their shame by sewing fig leaves together (Genesis 3:7), then they had watched as God killed an animal to clothe them with its skin (v. 21), and so they had learnt the principle that is explained much later in the Letter to the Hebrews: ‘Without the shedding of blood there is no forgiveness of sins’ (Hebrews 9:22).

In the course of time Cain brought to the Lord an offering of the fruit of the ground, and Abel also brought of the firstborn of his flock and of their fat portions. And the Lord had regard for Abel and his offering, but for Cain and his offering he had no regard (Genesis 4:3–5).

Later, in the Law of Moses, God confirmed what Cain and Abel probably already knew: the firstborn and its fat belong to Him (Leviticus 3:16). There was provision in the Law for grain offerings (Leviticus 2), but this was not what God required of the brothers. Abel had obeyed God’s command that blood must be shed in order to receive forgiveness of sins. Cain had not.

Worship With the Heart

The attitude with which an offering is made is crucial. There was something in Abel’s and Cain’s motivation which made one offering acceptable and the other unacceptable to God. The Bible is clear that God looks at the heart (1 Samuel 16:7) and without faith it is impossible to please Him (Hebrews 11:6). When Cain and Abel approached God in worship they needed to acknowledge that they were sinners in need of the covering God could provide, and to ‘worship God in spirit and truth’ (John 4:24). Abel offered in faith, and his faith was acceptable in God’s sight:

By faith Abel offered to God a more acceptable sacrifice than Cain, through which he was commended as righteous, God commending him by accepting his gifts. And through his faith, though he died, he still speaks (Hebrews 11:4).

It is a fundamental principle that we must approach God in faith. Abel did not value his flock more than God, but gave to God the best he had. ‘Whoever would draw near to God must believe that he exists and that he rewards those who seek him’ (v. 6).

Cain was angry and envious of Abel. Instead of repenting and seeking forgiveness from God he slew his brother in the field, and then lied to God: ‘Then the Lord said to Cain, “Where is Abel your brother?” He said, “I do not know; am I my brother’s keeper?”’ (Genesis 4:9). God knew what Cain had done, but because of His lovingkindness He took pity on him and put a mark on him so that no one would take revenge on him (v. 15). Cain still did not repent. He went out from God’s presence and dwelt in the land of Nod (v. 16).

The Apostle John gives us further insight into Cain’s heart. ‘We should not be like Cain, who was of the evil one and murdered his brother. And why did he murder him? Because his own deeds were evil and his brother’s righteous’ (1 John 3:12). Those who belong to ‘the evil one’—those who follow their own sinful desires—will do evil, and those who do evil will naturally loathe those who do what is right.

When God confronted Cain with his brother’s murder He said ‘What have you done? The voice of your brother’s blood is crying to me from the ground’ (Genesis 4:10). But the Letter to the Hebrews contrasts this with the blood of Jesus Christ: ‘To Jesus, the mediator of a new covenant, and to the sprinkled blood that speaks a better word than the blood of Abel’ (Hebrews 12:24). Abel’s blood cried out Cain’s guilt; Christ’s blood cries out for our forgiveness.

Like Abel, Jesus Christ offered a sacrifice which was pleasing to God and was slain by wicked hands. The offering Jesus made was his own life, which he laid down as a sacrifice for our sins. If we worship God in the way He requires—rather than doing what we think is right—then in Christ ‘we have redemption through his blood, the forgiveness of our trespasses, according to the riches of his grace’ (Ephesians 1:7), and there is a wonderful and glorious hope awaiting us in the age to come.